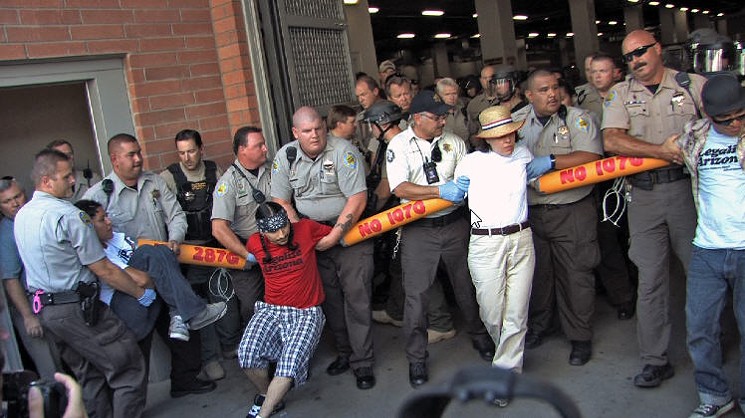 As a movie and a movement lover who will be toggling between the Oscars this Sunday night and news of this nation’s tumultuous times, I wonder what it would look like if the power of film was maximized to equip communities of faith to advance justice.

My dad was a civil rights preacher.

My church is a sanctuary church, a part of our 21st Century underground railroad.

In this country, there are millions of progressive people of faith and tens of thousands of institutions living with the mandate to heal and repair the world. But all too often, communities of faith can’t or don’t see the struggles for justice of people and places they have not and may never come to know.

Documentary films can provide windows into these worlds.

And yes. In this day of Black Panther, the case should be made for using all kinds of film and media as organizing tools in communities of faith, but I want to lift up the particular value of documentary to provide windows into worlds folks need to see.

Recently, I have witnessed three examples that give me clues as to what powerful integration of film into faith-rooted organizing can look like.

Last summer I was at a two-day teach-in and rally for the Poor People’s Campaign. 50 years ago, the activist community of which the Rev. Dr. Martin Luther King, Jr. was a member was leading a campaign to liberate poor people in this nation, a campaign led by poor people. Today, a community of activists all across the country has taken up the mantle of that campaign and will be participating in 40 days of civil disobedience between Mother’s Day and Summer Solstice of this year .

At that state-based teach-in I attended, the facilitators shared clips from Orlando Bagwell’s Citizen King to remind us that grassroots movements led by poor people, all kinds of people, and people of faith have shaped this nation’s history.

These clips transported those gathered in the room – poor and working class activists, organizers and leaders of faith – into fellowship with those who came before us on whose shoulders we perch. Our imaginations were kindled to see what is possible as well as to grapple with the mistakes of movement that has come before us. The window into the civil rights struggle that Citizen King provided restored our hope, reminded us that times have been bad before, but still we have risen to the challenge, and fired us up for the campaign ahead.

Around the same time, I attended a daylong civil disobedience workshop for leaders of faith and moral courage who wanted to put their bodies on the line and bring their communities and congregations into the movement for immigrant justice in the age of Trump.

The training was facilitated by leaders from the campaign to unseat Joe Arpaio in Phoenix, Arizona, renegade sheriff who was directing his police force to go after immigrants in ways that were outside the law.

In order to bring the gathered faith leaders into the culture and practice of that campaign, the facilitators opened the session with a clip from Daniel Devivo and Valeria Fernández’s documentary film Two Americans. It catapulted us into that movement moment, thousands of miles away and a year or so ago.

Again, the window through which we could witness the challenges and triumphs of the work made us believe we could win and showed us ways others have done so, leaders of faith offering up their moral authority in the community on behalf of most impacted people whose leadership they flanked. (The picture above is a still from Two Americans representing the Rev. Susan Frederick-Gray, a local Phoenix pastor committing civil disobedience. Rev. Frederick-Gray is now the president of the Unitarian Universalist Association.)

I have learned some lessons in my own work at the intersection of faith-rooted justice work and documentary filmmaking. The last film I directed, Love Free or Die, told the story of the church putting its life on the line for LGBTQ justice, following Gene Robinson, the first openly gay person to be elected bishop in the high church traditions of Christendom, and the movement he was a part of that changed policy and culture in church and state in the U.S. and abroad.

We folded our national TV broadcast and 400 community screenings of the film into a strategy to advance the marriage equality work of 2012 – in particular the campaigns in Maine, Maryland, Minnesota and Washington.

At Auburn, where I work, we had participated in research for the previous two years on how to move conflicted Christian voters to support LGBTQ equality because they were Christian and not in spite of it.

During the year of our screenings, we used that research to equip those who attended the 400 screenings to engage their conflicted Christian friends and family in conversation to help them vote on the right side of history. We also worked with the state campaigns, in partnership with national LGBTQ justice organizations, to train leaders of faith to make the moral case for equality in public and in the press.

In all four states in which we did this work, marriage equality was won – not the ultimate battle for LGBTQ people in this country, but a step in the right direction. In the two states that conducted exit polls to determine what swung the vote, the Christian messaging and messengers were named as one of the top determinants.

I can’t specify what role our movie screenings, friends and family plan, and research and message training played in those victories, but I did see deep relationship between media makers, communities of faith, and movement workers, and that, in and of itself, was an advance in my own practice of engagement with communities of faith around a documentary film.

Key to movement work, to faith traditions, and to documentary film is right relationship – creating a practice and a world in which the full humanity of all is honored and the conditions needed for all to flourish exist.

For justice to be won, faith communities and filmmakers need each other – to imagine the world as it should be and to bring it into being.

A version of these remarks was offered this past week at GoodPitch Local in Dallas in the company of filmmakers, organizers and funders committed to maximizing the power of media for positive social change. The Auburn team is profoundly grateful for the invitation to be a part of this transformative model of movement building.