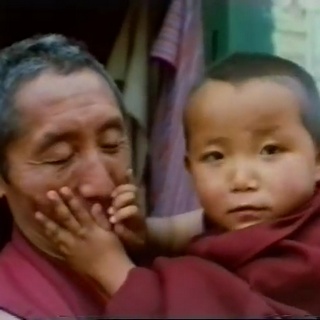 As a documentary filmmaker who considers spirituality life’s most fascinating dimension, I always wondered why there weren’t more great documentaries on matters of faith. A few years ago, I was asked to teach a course on documentary films and filmmaking at Union Theological Seminary. It was my hope that I might find the best films on themes of religion and spirituality and encourage my students to widen that circle of great films by making their own. In the process, I identified a handful of what I consider documentary masterpieces (or near-masterpieces), and I want to share my favorites with you. I encourage you to add to the list by writing to me about your favorites, so that my students and I may be further inspired.

One criterion for a great documentary is that it makes the most of its medium–a marriage of sound, picture, and storytelling. Baraka has no dialogue and no conventional plot, but even without these narrative devices, it tells with great art, economy, and ravishing images the story of life on earth. In Baraka, the camera travels the world and alights like an angel for a moment on a shoulder or a stone or a wave–observing the quiet and roaring movements of creation. It captures the truth about human nature, our need for ritual, our quest for meaning, and our troubling relationship to our home in a way that seems to explain everything without breathing a word. One student likened this film to a prayer and watching it to joining the filmmakers in meditation.

This remarkable film follows a group of Tibetan monks who seek out their reincarnated master, thought to have been reborn as a small boy. The documentary focuses on the relationship between the former master’s favorite attendant and the boy as they become acquainted or–depending on what you believe–reacquainted. It is filmed beautifully in classic cinema vérité style (meaning the camera appears to follow life where it leads). The movie feels to the viewer as if the camera was never even there. “The Reincarnation of Khenshur Rinpoche” invites us into a year in the life of this Buddhist community, the intimate bond between monks, and the experience of a country boy who is told at the age of 3 that he is a wise master and great leader.

This movie’s tone is so difficult to achieve–at once respectful, critical, and heartwarming, and at all times leaving viewers to draw their own conclusions about the benefits and challenges of a separatist religious community. There is an array of traditional documentary techniques here: Daum and Rudavsky follow a handful of peoples’ lives but also weave in narration (by Leonard Nimoy and Sarah Jessica Parker), “talking head” interviews with experts, and in-depth history lessons. Given this funky stew of style choices, it is hard to put one’s finger on what makes the film so affecting. There is no resisting, however, the filmmaker’s invitation to view the world from the perspective of people who have come so close to extermination. They fix our gaze on the magical quality of a community so grateful for life, one committed to being happy and to the deeply moving good-heartedness of the individuals.

This quirky film brings a 1980s MTV aesthetic to the sometimes sleeping-pill affect of interview-driven, “talking head” documentaries. Directed by movie star Diane Keaton, it explores the views of a diverse crowd of Californians on the afterlife. This random group of contemporary Americans are intercut with images of heaven, hell, God, and the meaning of life manufactured by both American religious organizations and Hollywood over the past century, so that the film becomes a sort of dialogue between the images and the speakers. The film’s heart is deeply good, and its insights are often breathtaking. If nothing else, it pushes viewers to think about how we would respond to the questions: What is life all about, and What does it add up to in the end? Teenagers love this one, and so do I.

Black Is…Black Ain’t is not principally about religion, but it has an excellent segment about a Pentecostal, principally gay congregation and is made by one of the most important documentary filmmakers of our time. What it’s about on its surface is identity: The church, for Riggs, plays a large part in his understanding of being African American. On its deepest level, however, the film is about making sense of life in the face of suffering, and the scene at the church represents both transcendence and embodied power in a way that provides what feels like answers to life’s biggest questions. Riggs didn’t finish making this film before he died of AIDS in 1997.Riggs is a poet whose medium is documentary. One of his films was at the center of the National Endowment for the Arts battle in the ’90s. His work will be exhibited and screened for centuries to come.

This film won the Academy Award in 1972–the only documentary film on religion I know of to have done so. Ironically, Marjoe doesn’t explore the richness of religious experience but rather exposes its shady side. Focusing on a circuit evangelist who really wants to be a rock star, the movie represents the enterprise of ministry as a con and the passion of believers (filmed exquisitely by some of the best documentary cinematographers of the century) to be simple-minded foolishness. The film offers a delicate portrait of a religious young man coming of age in a cultural revolution. He is a lost soul and a leader of lost souls. Watching him wander, for me, is painful, hysterical, moving, and very disturbing.

It is important to mention the groundbreaking work of Bill Moyers. Programs like the The Power of Myth (conversations with Joseph Campbell), Genesis: A Living Conversation (a roundtable, interfaith discussion about the book of Genesis) and Amazing Grace (a study of the history and power of the old Christian hymn) have sparked crucial and exciting dialogue on issues of faith and religion. The reason his films do not rank on my list of favorites is that his goals appear to me to be principally journalistic rather than artistic; as a result, much of the richness available in the medium of film is left unmined. I am excited to report that there is a number of good documentaries on religion heading our way. Just this week at the Sundance Film Festival, Sandi DuBowski premiered his film Trembling Before G-d, a lovely exploration into the lives of lesbian and gay orthodox Jews. And Blackside Productions, makers of Eyes on the Prize, will soon team with PBS and broadcast its latest documentary series, This Far by Faith, a history of the African-American church. I am hoping that such fine productions signal the wave of the future.