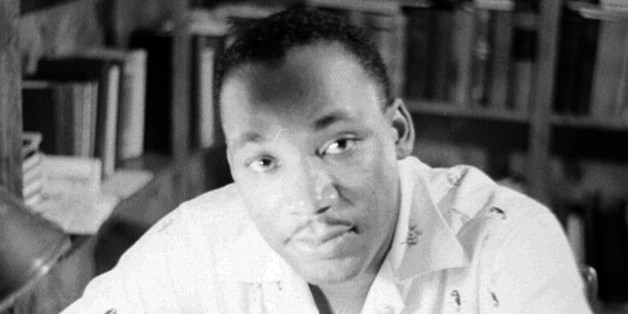 Watching Selma in the middle of a crowded movie theater this week, I found myself doubled over in emotion. I knew the faces and their voices. My daddy was a white preacher who was run out of his North Carolina pulpit by the KKK for his civil rights support. In 1964, he and my mother moved to Alabama. She was a teacher who was among the first to work in the integrated schools. I was born the following year, six months after the Selma March and two years to the day after four little girls were murdered at a church up in Birmingham.

Not surprisingly, I got hooked at a young age on the power of prophetic witness. Today, I train leaders of faith and moral courage — as King called them in the film, “people of God and good will” — to speak their truth and stand for justice in the media. A documentary filmmaker with a theological education, I couldn’t bear the fact that the household names who spoke for faith and values in this country in the 1980s and ‘90s — people like Jerry Falwell, Pat Robertson, and Ralph Reed — bore no resemblance to the prophets who risked and often gave their lives to stand for freedom in the name of faith just decades before.

So I launched a program with my colleague Katharine Henderson at Auburn Seminary to identify and equip today’s voices of moral courage. What I have learned is that voices like King’s are not a thing of the past; they are courageously leading movements in communities all over America. Over the past ten years, we have trained 5000 of them — Muslim, Christian, Jewish, Secular Humanist and more. But I have also learned that the movement and its leaders must up their game to carry the moral frame over and against the mighty and monied Right. It is when the public will requires nothing less that our jaded and cantankerous congress and politicized Supreme Court are most inclined to stand for justice for all.

And so, I want to offer three recommendations to all who believe in freedom and are praying that 2015 is the year that future history books and major motion pictures show that we stood as communities and as a nation for justice for all.

First, lift up your voice. Much has been written over the last 10 years about the fact that this is not your grandparents’ movement and that there is strength in the decentralized, multi-vocal collective outcry that we see from Tahrir Square to Occupy to Ferguson and the streets of New York after the senseless slaying of our hometown neighbor, Eric Garner. We are the ones we’ve been waiting for and we all must unleash our inner prophet. What I loved about Selma was not just King’s testimony, but the power of John Lewis’ voice, the meaning of Viola Liuzzo’s and Annie Lee Cooper’s witness.

But second (and on the other hand), there is still a critical role locally, nationally and internationally for the singular prophetic voice who captures the public imagination and changes history.

The Rev. Dr. William Barber II and his Moral Mondays protests have inspired the nation as he galvanized the people of North Carolina to mobilize against well-funded attempts to redistrict the state — a surreptitious move to effectively undo the great gains of the Civil Rights Movement by keeping the poor, people of color and the progressive majority in North Carolina from carrying the vote.

Sister Simone Campbell, when the Vatican came down on her posse of nuns for being too outspoken about poverty and not loud enough about abortion and homosexuality, took it as an opportunity. She purchased a bus to proclaim good news to the poor all across the land. Now, on any given day, you can hear her moral call across the media landscape; it seems to me that even the new pope has borrowed a page from the good sister’s book.

There’s Bishop Gene Robinson. For four years, I personally watched history tip in the wake of his moral stand for lesbian, gay, bisexual and transgender people. In my 2012 documentary about the Bishop, Love Free or Die, we see policy dramatically change in church and state right before our eyes. He stood down daily death threats for the better part of a decade and stood up for justice on the steps of the Lincoln Memorial at President Obama’s first inauguration. I don’t doubt that he gave moral cover and framing to Obama when, at his second inauguration, he so famously put equality for LGBT people on the national agenda for the first time in American history.

And new prophetic voices are emerging. Last month I worked with two young Union Seminary students whose unequal treatment at the hands of the police — based on their different skin colors — made plain the racist state of affairs in this nation and in the NYPD. Their everyday story tore through the news cycle that week from the New York Times to MSNBC. I had the feeling that I was witness to the birth of two future leaders who we will be hearing from in the years to come, not unlike the young leaders in Selma whose early experiences in the Civil Right Movement led to lifetimes of history-changing service.

But third, and perhaps most important, no matter how important your point of view, you cannot expect the media to come to you for comment on the news cycles of the day. You’ve got to make your own news cycle. As it was in the days of the prophets who launched our faith traditions in the first place, so it is today. Where would Sister Simone be without her bus? Where in fact would she be without Sound of Music and Sister Act? She knows the role she is playing in the public imagination and public square and does not shy away from understanding how this news business works.

To grab headlines and capture the attention of national news cameras in 1965, selecting Selma, Alabama was an important and strategic move. King and his colleagues studied the various Southern towns, searching for the right backdrop and cast of characters — not unlike Selma‘s director Ava DuVernay had to do — in order to achieve success. What Selma and history show is that you have got to work to capture attention before you can move hearts and minds.

Walking out of the movie theater last night, I knew that my daddy needs to come and take my sixth-grade daughter, a girl of color named for him and my mother, to see Selma. I imagine he might make it real to her the strides we have taken as a nation in just a generation that make it possible for her, a Latina with two gay dads, to flourish. But in this land where still today too many are treated unjustly just because of who they are and how they look, my prayer is that my daughter Alice gets hooked as I did on this grand tradition of speaking our truths so that all may be free, and that in 2015 our cries for justice flow like a stream more mighty than this nation has ever known. Having worked with so many powerful voices in this current generation, I believe we can. May it be so.